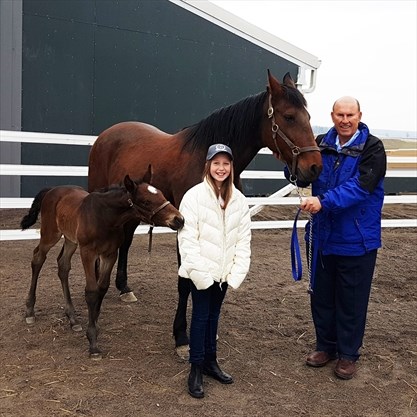 With more than six decades around horse racing, Bill Galvin can tell you the sport, and close ups with standardbreds in general, lend themselves to strong literature.

The Mississauga resident, who was inducted into the Canadian Horse Racing Hall of Fame in 2014 for all of his work as a writer, publicist, promoter and race official, has been passionate about horse racing since he was growing up in Arnprior.

He’s now hoping children will catch on to that passion through the Youth Literary Derby writing contest for children from grades 5-8.

“It’s been a pretty enthusiastic response,” Galvin said. “Because it’s provincewide, we’ve got the chance of getting to over 2 or 3 million students, maybe more.”

The derby is now open to children across Ontario up until June 15. Through the program, Galvin and his partners are arranging for trips to standardbred breeding farms and children are encouraged to write a poem or essay about the experience.

It is scheduled in the midst of foaling season in April and May.

The derby is revamped from a similar program he oversaw years ago.

The top three winners in each category (poem and essay) will receive prizes of $250, $150 and $100, respectively. Those same amounts will be donated to the entrant’s school or a local library if the child is home-schooled.

“I put a note in there to challenge (children) to get away from computers and let the kids get back to nature a little bit, connect with horses,” said Galvin, who published Ballads of the Turf and Other Doggerels in 2006.

The Youth Literary Derby is sponsored by Tom Rankin, a standardbred breeder and owner from St. Catharines.

Schools are responsible for transporting students to the farms, but program organizers will co-ordinate the visits.

Visits to farms began recently and for students in Peel, there are trips planned to nearby farms, such as Winbak Farm in Caledon May 26 and Joe & Karen Hudon Farm in Acton on May 27.

Galvin and a number of partners are getting the word out to various school boards in Ontario,

They’ve received endorsements from many groups, including the Mississauga Arts Council.

“Essential to creative expression is the stimulating effect of experiencing something new, something that engages your senses and prompts you to think differently, see differently, feel differently.” stated Mississauga Arts Council executive director Mike Douglas.

“At the Mississauga Arts Council we were immediately impressed by the presence of all of these stimulants in the new Youth Literary Derby. Kids away from home on a farm, engaging with magnificent horses and writing about it.”

From all of his years being around horses, Galvin can say encounters with standardbreds are a one-of-a-kind experience.

“Standardbreds have a bit of a different temperament,” Galvin said. “They’re very friendly, they cosy up to you. There’s just something about them that is different from other breeds. They just make friends easy.”

We're not around right now. But you can send us an email and we'll get back to you, asap.