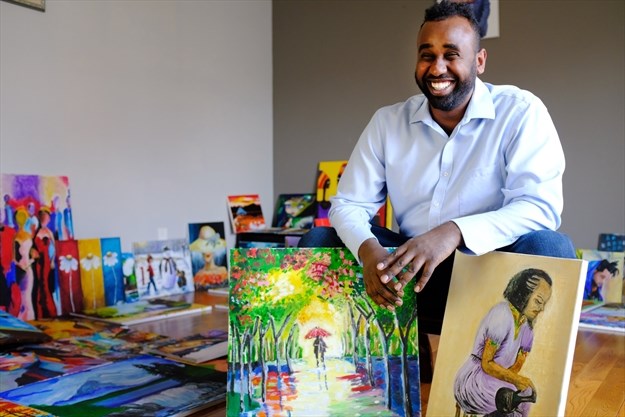 Published in Mississauga News on April 4, 2018

Doctors didn’t think he would survive.

Christine Long was walking across a parking lot when, “I felt something rip in my brain.”

A Mississauga man has turned a passion for art into a successful creative outlet after battling back from a traumatic brain injury.

Abel Mekonnen was only six when was vaccinated for measles, says his sister Chrissy. What nurses didn’t realize was that Abel had the flu and was running a fever.

Within the same day, Chrissy says her brother became unresponsive. The family took Able to the hospital, where doctors gave him antibiotics.

“Doctors didn’t know the source of the problem or how to cure him,” said Chrissy.

The antibiotics made Abel sicker and he fell into a coma for six weeks. The family didn’t think Abel was going to survive. With support from the Ethiopian community, the family flew a priest to Vancouver from Toronto.

“I was very sick,” says Abel, who is now 27. He remembers waking up and being overcome with emotion.

Abel couldn’t eat on his own, walk or talk. He couldn’t even hold a pen.

Doctors were about to insert a breathing tube, but Abel started to move his thumb. The family started to see some progress, says Chrissy.

“Everything he did was a breakthrough,” she adds. “He continued to heal on his own.”

Abel did physiotherapy for six months as well as speech therapy. He went back to school half-days in Vancouver. Art was always an outlet. “I’ve loved art since I’ve been seven or eight,” he says.

Chrissy says art helps her brother work through his emotions when he is tired and stressed, although she points out he generally has a good sense of humour.

The organization provides support to approximately 400 clients, including family members, through a variety of groups that offer: anger management, depression support, self-esteem support, exercise and fitness and social/recreational experiences.

“It’s actually a cool place,” he says, adding the activities get him out of the house and keep him from getting bored.

In the last few years, Abel has expanded his interest in painting through art classes with the City of Mississauga. Working in acrylic and oil, Abel has created 230 paintings, ranging from portraits to landscapes.

He was recently featured in The Artis magazine as one of four local artists pioneering new frontiers with brain injury in the art world. In February, he took part in his first art show called Art Rewired from the Creative Hemisphere — presented by Mind Forward.

“This has been a really good outlet for him,” says Chrissy, adding that her brother wants to use his experience overcoming adversity to help others.