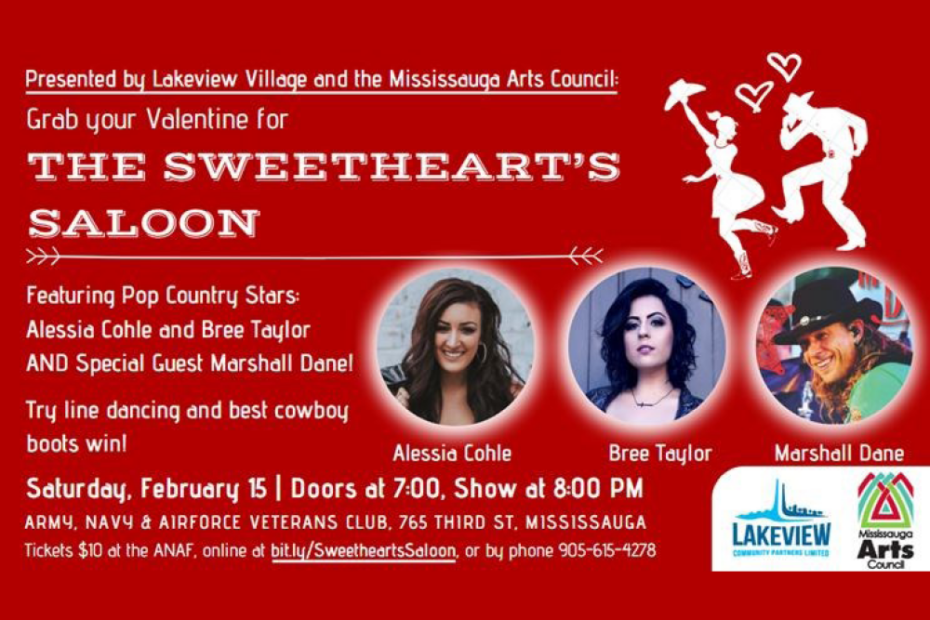 MAC and Lakeview Village team up to bring award-winning local country music stars to the stage at The Sweethearts Saloon – Valentines Country Dance.

The Sweethearts Saloon is the first event of its kind produced by the Mississauga Arts Council and sponsored by Lakeview Village. Appropriately timed for Valentine’s Day weekend, it’s a perfectly themed night-out for any music, dancing, or country lover. Those attending are encouraged to come out in their best country outfits and cowboy boots to take part in a cowboy boot contest. Priced at only $10 tickets should go fast.

Mississauga’s very own country songstress, Alessia Cohle has been putting her stamp on country music ever since the successful release of her single Love Gone Right. She recently released Wild Eyed Wander, the follow-up EP to her FACTOR funded, fulllength album, Talk To Me. Alessia’s current single, ‘Tell You”, broke the Top 90 Country radio charts, and put Alessia into the Top 20 Female Artists playing on Country Radio. Watch her music video for Tell You here: https://www.youtube.com/watch?v=zVDzSXdoVjg

Canadian singer-songwriter and recently nominated “Best New Artist” for the Mississauga Music Awards, Bree Taylor is a force to be reckoned with. Her highly anticipated single release Cry, hit all streaming platforms on January 31. “I connected with this song because it sends the message that it’s okay to not be okay sometimes. That showing your vulnerabilities isn’t a weakness – it’s a strength,” says Taylor.
Listen to Cry here:
https://open.spotify.com/album/5gpLAOtWlE2BR31k0r9Jjq?si=WqpwqUVgQ9O5cuX9d
J04og

Five-timed nominated Male Artist of The Year (CMA), Marshal Dane is fresh off the heels of performing in Nunavut and Greenland. Indie Rocker Marshall Dane is back on the road touring East to West Canada, visiting Radio Stations with his new single – Out Crowd. “I love to write songs and I love recording them, but when I step out on a stage in front of a packed house, that’s where the fire starts for me,” says Dane.
Watch his music video for Out Crowd here: https://www.youtube.com/watch?v=wisiUlLX0kc