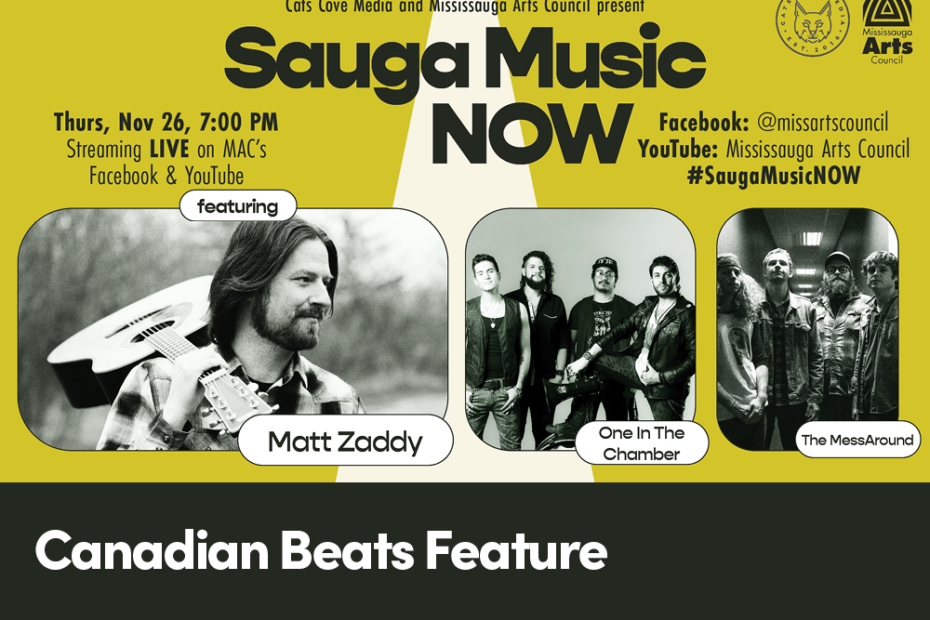 Written by Brooke Holmes and published on canadianbeats.ca on December 18, 2020

On Thursday, November 26th, 2020, the Mississauga Arts Council partnered with Cats Cove Media to present: Sauga Music NOW! A Livestream concert event featuring Matt Zaddy, One in the Chamber, and The MessAround.

The link to the Livestream was easily accessible on the Arts Council’s Facebook page. The actual Livestream took place on Youtube and featured a chat page on the side for viewers to express their excitement and shout out their favourite artists. I love that we have adapted to COVID life and can still find ways to enjoy live music. A two-minute countdown took place before the show began, which gave the Livestream the feeling of a live show.

Rob Wilson, of Cats Cove Media, hosted the show. The Livestream was filmed at the Rehearsal Factory Mississauga. Wilson began with a brief overview of the goal of this event which is to feature local musicians and give them a space to share their music.

The MessAround opened the show with their modern rock and high energy. Wilson mentioned that this was the band’s debut performance, how exciting! The band’s three-song setlist included ‘So Strange’, ‘Hit the Ground Running’, and ‘Queen of the Demons’. The MessAround’s live sound showcases their classic rock influences such as Van Halen. Catchy guitar riffs and solos, passionate vocals and pounding drums made this band a pleasure to watch. A viewer posted that they enjoyed the ‘signature vocals with attitude’, which is apt.

Next to be introduced was One in the Chamber, featuring Canadian Beats’ own Gerrod Harris on drums! They released their first EP in 2018 and their sound can be described as ‘down and dirty’ rock. This three-song setlist featured the titles “Bills To Pay”, their new single “To The Gallows”, and “Blow”. The strong range of the lead vocals was complimented by the harmonious backup vocals. One in the Chamber has an energetic stage presence that is apparent even through a screen.  These talented musicians really ‘let it blow’, as a viewer mentioned in the chat.

Last, but certainly not least, was the main act. Matt Zaddy, an experienced musician whose style ranges from folk-rock to modern soul. Zaddy began his five-song set with ‘Brighter Days’ which was a change of pace from the opening bands. It featured a groovy bassline and incredible vocals. In between songs, Zaddy mentioned how exciting it was to be playing with a full band, for the first time in six months. His joy came through in every song he played, which included ‘Busy’ and ‘This Too Shall Pass’. The lyrics of the are latter very relevant to this year, a reminder to never give up. The second last song Zaddy played was ‘Dear Friend’ which he said he feels is also relevant to these crazy times. Taking time to reach out to family and friends, and feeling that ‘when we are together, it’s like no time has passed’ as he says in the song. The final song of this amazing set was called ‘Little River’, which Zaddy wrote about his friends’ place in Ottawa. This song really created a setting, and that’s good songwriting.

The directing and videography of this Livestream concert was incredibly well executed. The angles and lighting created an atmospheric experience. Rob Wilson hosted, wrote and directed this amazing night of music. It was the highlight of my November and I can’t wait for the next installment. Well done Mississauga Arts Council and Cats Cove Media!