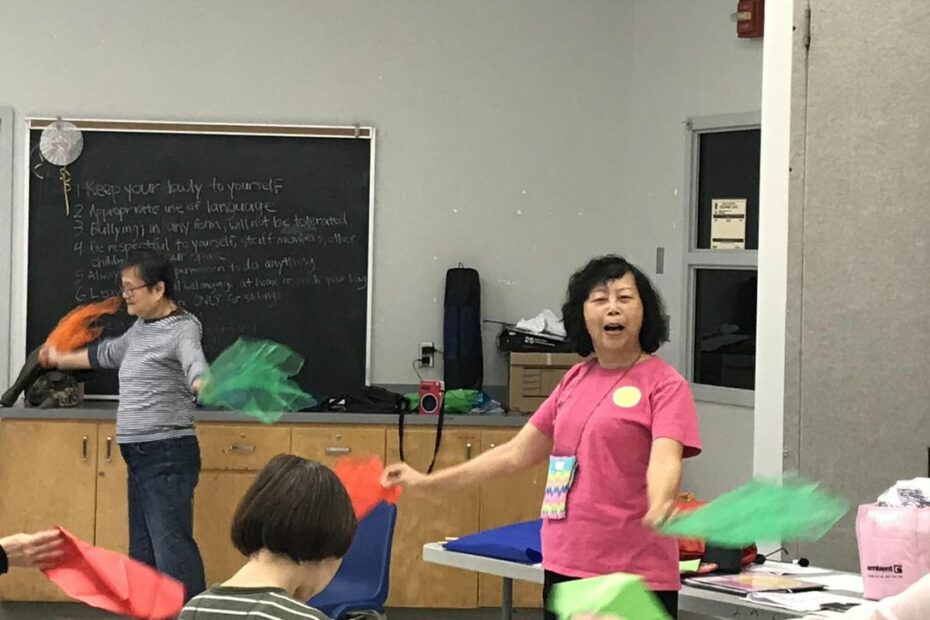 May Wong is leading her group of seniors through an apple-picking excursion.

Except she’s not in an orchard, she’s in a brightly lit conference room overlooking a man-made lake in a Scarborough community centre.

“Before you pick the apples, wash you hands, wipe both hands,” says Wong, demonstrating by rubbing her hands together then wiping her hands on her jeans. “Bring the basket and start walking. Look to the right, look to the left. Bad apple toss it away!”

Gathered in front of her are students who are following her every move, picking up imaginary apples and throwing them over their shoulders.

Wong is leading one of her weekly sessions of Brain Beat Dance, a unique exercise technique aimed at stimulating the brain health of seniors.

While there are no lack of dance classes from salsa to line dancing aimed at the aging population, Wong’s non-profit organization has filled an unusual niche in Toronto. It is a fusion of world music, dancing styles, conversation, storytelling, and an explosion of Circus-like props that aim to get seniors moving. And thinking.

Wong, the president of the Canadian association, runs the non-profit from her condo. Over the last decade, the retired IT professional has grown the program to more than 20 instructors that deliver classes across the city to community centres and nursing homes.

Many of the techniques are tailored to physically challenged seniors. But the level of difficulty can be increased depending on the audience. Some classes are taught from a seated positions. Others are standing or a combination of both.

“It really makes a difference in terms of feeling less isolated for many seniors,” Wong says. “Exercise is important, but you combine it with music and conversation and dancing and it becomes a really powerful therapy.”

There has been much research on the benefits of exercise on brain activity. Less so on the connection between music and cognitive impairment. While Brain Beat Dance is designed for all seniors, where it seems to make a huge difference, Wong says, are in patients with cognitive issues who would not normally be able to participate in traditional exercises.

“Somehow music activates memories in dementia patients, which in turn leads to more social engagement and interaction with caregivers,” says Dr. Claude Alain, a scientist at Baycrest’s Rotman Research Institute who is studying the effects of music on patients with mild cognitive impairment.

Key to the success of the program is that each hour-long class is a non-stop fusion of music ranging from a polka to a Chinese folk song. There is conversation. There are an endless stream of props from flowing colourful scarves, to chopsticks, to Hawaiian Leis, illustrating each exercise.

On this sunny fall weekday, Lina Cuomo, 65, can be found waving colourful handkerchiefs in the air as a classical Cantonese song played in the background.

“In the beginning it was intimidating. The first day to be honest I was discouraged, but you quickly fit in,” Cuomo says.

“Everyone goes at their own pace. And the music is really great.”

“Either you’re healthy or not healthy it’s really good. Anybody can follow this,” says holistic doctor Helena Tham, 75. “It really forces your brain to work.”

According to Wong, Brain Beat Dance was started in 2003 by German national Rainbow Yuen, who was living in Canada at the time. Yuen, a choreographer, was inspired by the many state-sponsored programs that encouraged Germans to stay fit, particularly the dance classes. Taking inspiration from classical dance and adding modern and cultural elements, she created BBD.

The first to implement the classes into their program was the Yee Hong Centre for Geriatric Care in Scarborough. The facility was the founding sponsor of the movement which has spread across the GTA.

“We now know that physical and mental health are so much intertwined that today it seemed natural and unquestionable,” said Dr. Joseph Wong, the founder of Yee Hong. “Back 25 years ago, there was still quite a bit of doubt. Brain beat dance proves that it is beyond doubt (that) certain physical activities promote healing of degenerative tissues in the brain.”

May Wong (no relation) says it all starts by telling a story — a narrative that people can respond to.

On this day, she is talking about the weather. She strikes one pose for lightning. Another for rain.

“In life we have good times and bad times. It’s not always smooth,” she says. “There might be bad and good weather but the sunshine will come through again.” The class of 13 students applaud.

“My mind during the day is always busy and I’m not focusing. But coming to this class makes a difference,” says Mary Zakher, 64.

Zakher goes to the gym regularly, but says Brain Beat Dance has helped her co-ordination. Today she is following instructor Wong in an exercise of acupressure techniques that includes touching pressure points in the neck and face.

“See, I’m giving you a facial and you don’t have to pay for it,” Wong chortles.

Later in the program, after simulating throwing lightning bolts in one of the more dynamic exercises, Zakher approaches a reporter. “I forgot to tell you earlier how uplifting this is as well,” she says, smiling.