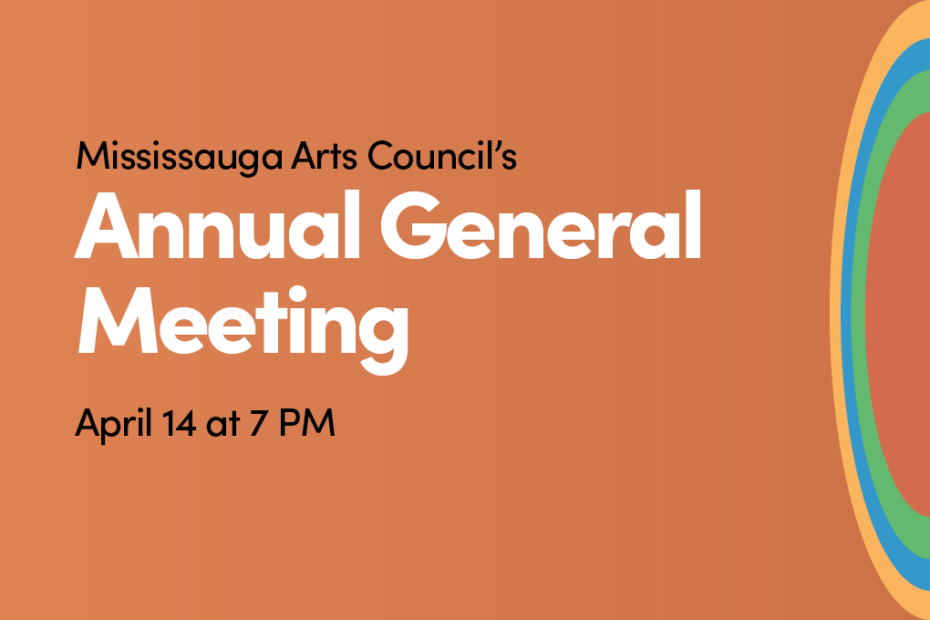 Mississauga Arts Council’s Annual General Meeting hears from leaders and shares strategic priorities for the future of the arts.

“Congratulations MAC, on this most valuable and important year in your history as our city’s leading arts organization. I’m truly looking forward to enjoying creative events again with the wonderful talents we have here, when Mississauga artists can shine again”

Paul Damaso, Director of the City’s Culture Division’s glowing words of support were shared with attendees, “There is a favourite expression of mine that ‘pressure makes diamonds’. That expression has never been truer than it has been for MAC this past year. I want to congratulate and thank you for your incredible efforts. We look forward to your continued leadership and partnership as we move towards recovery and ‘blaze new paths’ to an exciting Post-Pandemic future for the Arts in Mississauga.” Full letter: bit.ly/PaulDamasoLetter

The AGM kicked off with a video of O Canada performed by long-time MAC member and trumpeter, William Leathers, who now studies at The Julliard School in New York.

President Ron Duquette thanked the Board and staff their contributions and the work they did to support Mississauga artists during an unprecedented year. He also thanked MAC members who shape our strong and vibrant community. President Duquette noted that MAC developed a strategic plan that will inform our actions over the next 3 years. Strategic Plan: bit.ly/MACStrategicPlan

MAC’s Executive Director, Mike Douglas provided an overview of what the Mississauga Arts Council did to support artists in 2020.

“2020 started with so much promise, we hosted both our MAC at West Edge Open Mic and Open Mic LIVE at the Living Arts Centre, we danced all night at a country music showcase, called the Sweetheart Saloon, then the world changed.” said Douglas.

“We put together a COVID-19 VS. the Arts page sharing COVID news updates and links to new resources for our community. With so many losses by professional creatives, we had to find more resources and inject some hope, some money into the community. And we did, thanks to the Government of Canada, and other generous funders we were able to support 27 micro-grant projects. Helping artists pivot online. We saw our webcast concert audiences grow by thousands, for Rise Up Mississauga, the Sauga Music Series, and MAC Arts Cafe.”

MAC Board Director Grant Clark conducted the Board’s online election and announced MAC’s new board members and new advisory board.

MAC’s Virtual AGM concluded with a presentation of the video, This Moment, by Emily Roman (Elite Dance Company), which was funded through MAC’s 2020 Micro-Grant Program. Viewers marvelled, “If this can be done during COVID, imagine what the future holds!” and shared their compliments on the stylish and touching work.

During the subsequent monthly Board of Directors meeting on May 11, 2021, the new Executive Committee of the Board was elected. Ken Jones was voted the new President of the Board, Ron Duquette as Vice-President, Charles Chu as Treasurer and Marissa Mah as Secretary of the Board.

President Ken Jones acknowledged outgoing President Ron Duquette for his significant contribution to MAC. “Ron’s tremendous leadership saw MAC through what might be the toughest year ever for the arts community. His accomplishments, like the Hazel A Celebration: 100 Years In The Making musical documentary tribute was an outstanding success, and these have contributed to Ron’s living legacy as one of Mississauga’s top arts leaders.”