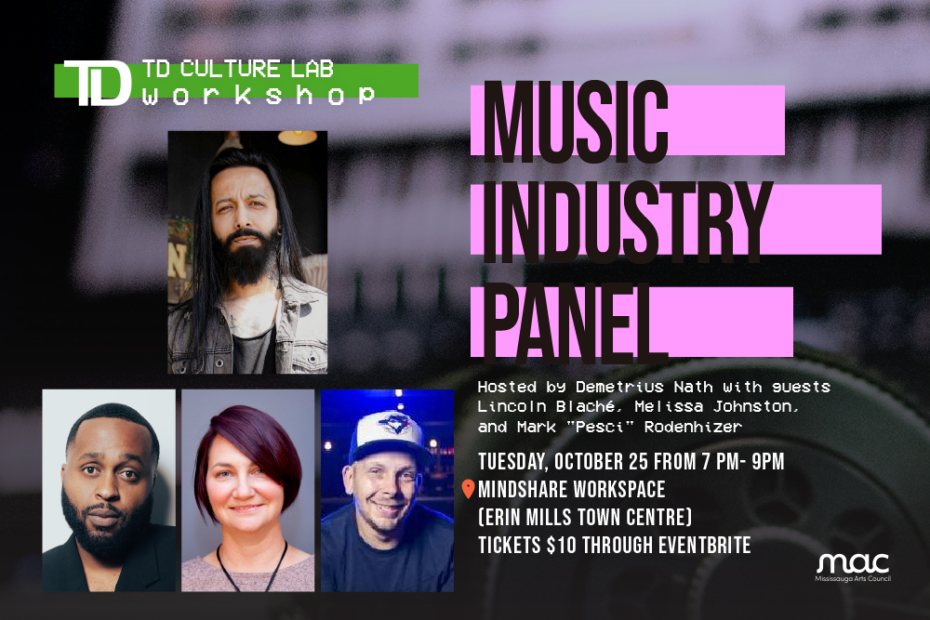 Sponsored by TD Bank Group and presented by Mississauga Arts Council, TD Culture Lab is a series of professional development webinars and workshops designed specifically for the creative sector in Mississauga. This fall, our workshops will be in-person! Join us at MindShare Workspace (Erin Mills Town Centre) for our Fall 2022 Workshop Series.

Learn from the experts about when and how to grow your music admin team. This engaging panel, led by Demetrius Nath (Mississauga Music) will introduce you to key players in the music industry and their roles, and answer all you questions about the non-musical players.
Panelists: Lincoln Blache (Made In Sauga), Melissa Johnston (Metalworks), Mark “Pesci” Rodenhizer (The Rec Room)

Register for this In-Person Workshop

Learn from the experts about when and how to grow your music admin team. This engaging panel, led by Demetrius Nath (Mississauga Music) will introduce you to key players in the music industry and their roles, and answer all you questions about the non-musical players. Network with your colleagues and meet Mississauga’s music industry experts: Lincoln Blaché (Record Label – MADE IN SAUGA® label), Melissa Johnston (Music Publishing at Metalworks Institute), and Mark “Pesci” Rodenhizer (Booker for The Rec Room).

He is also the founder of the not-for-profit initiative Mississauga Music, curating & organizing Mississauga Music Awards & Week working alongside community partners such as the City of Mississauga, Living Arts Centre & Mississauga Arts Council. During his spare time, he is the singer-songwriter & front man in the hard rock band MAYBE MAY. In addition, he is passionate about seafood.

“I had this vantage point from where I was of where I wanted to be,” Lincoln Blaché says of his childhood window. One of Canada’s most successful and driven entrepreneurs grew up within Mississauga, Ontario’s Sheridan projects. “Our building was surrounded by government housing. But just across Mississauga Road was affluence—one of the wealthiest streets in town; I wanted that for us.” Fueled by ambition, Lincoln went on to cultivate a multidisciplinary career as a Juno Nominated artist, songwriter, producer, label founder, and designer. “I wear many hats as a young, Black exec who has been navigating Canada’s music industry while trying to add to the framework of urban music,” he says. Approaching a 2022 that includes a handful of music releases on his MADE IN SAUGA® label, an apparel brand launch, and civic empowerment, Lincoln Blaché is again standing at a new frontier of where he aims to go.

Melissa Johnston is a music business professional with over thirteen years of experience in music publishing, specializing in mechanical licensing and royalty processing. She joined the team at Metalworks Institute in 2019 as an Instructor and has since taken on the role of Student Success Coordinator.
After graduating from Durham College’s Entertainment Administration program in 2006, she began her career at CMRRA helping the industry make the transition from physical media to the age of streaming. At the CMRRA, Melissa was able to hone her skills in client management while growing and managing a team of people responsible for the accurate licensing and processing of royalties. Melissa quickly rose through the ranks at the CMRRA and dealt directly with the largest music publishers, major and independent record labels, while interacting with senior management and helping develop a new licensing platform.
Melissa combines her passion for music with a deep understanding of the business side of the industry and the nuances of not only being successful in the industry, but how to navigate the many facets of the industry to thrive.

Mark “Pesci” Rodenhizer is a concert promoter, booker, and talent buyer. He currently oversees 5 locations of The Rec Room for Cineplex, and previously managed programming for Adelaide Hall, the Smiling Buddha, and Parts & Labour in addition to promoting independent concerts in basements and clubs across Toronto.