Sauga’s Summer Song Contest is back! Mississauga Musicians – Submit your hot new summer song for a chance to record it at Metalworks Studios for free! 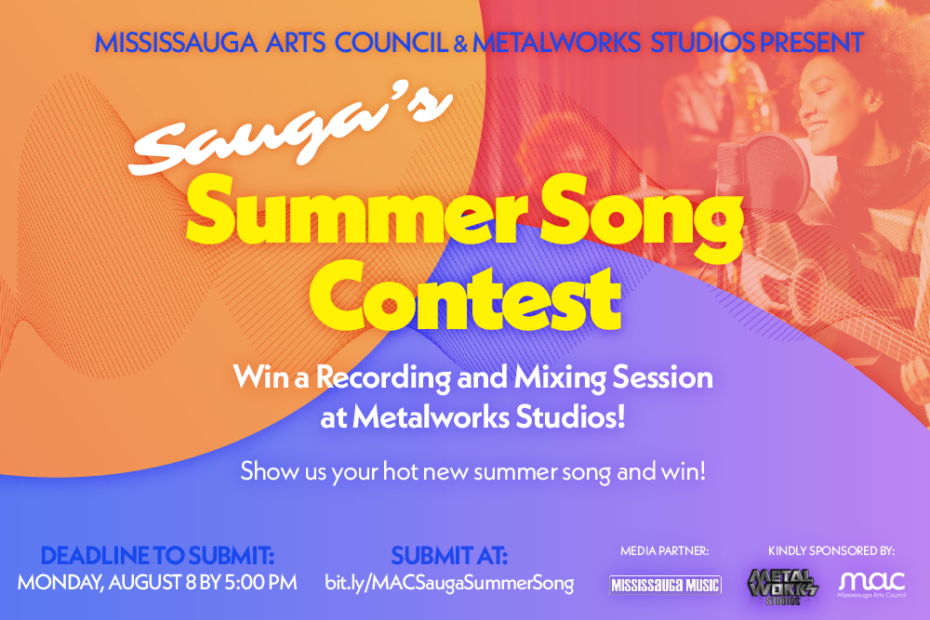 Mississauga Arts Council (MAC) and Metalworks Studios have teamed up to bring back Sauga’s Summer Song Contest with media partner Mississauga Music. We are looking for Mississauga musicians to send us a demo of their summer song for a chance to win a free recording and mixing session at Metalworks Studios, who have maintained an unsurpassed level of excellence spanning over four decades.

“Last year’s winner Adina V impressed the jury with her skillful songwriting and a fresh sound for her poignant tune – Admit It!, for release this summer,” says Mike Douglas, MAC’s Executive Director. “This year, we continue our search for a hit song from our wonderfully diverse music community. Excited to see where we go this year with this exciting opportunity to sponsor recording the best summer song in the best studio in Canada!”

The contest is open to any professional musician or music group living in Mississauga and is open for submissions from the following genres: Pop, Hip Hop, Country, Rock and R&B.

“We are pleased to be involved for the second year of this contest to invite more Mississauga talent to record at our studios,” says Gil Moore, Metalworks Studios Founder & CEO, “This competition is a stepping stone for artists to get their music recorded and showcased in our city and beyond. It might just be the breakthrough they have been waiting for.”

An established jury of music leaders will determine Sauga’s Summer Song Contest winner to be announced via video release at the end of August 2022. The winner will also be asked to co-present an award at the Mississauga Music Awards on September 16th, 2022.

Interested Mississauga musicians are invited to submit their demo to the contest by Monday, August 8th, 2022 by 5:00 PM. Guidelines, more information and contest form are located at: mississaugaartscouncil.com/programs/saugasummersongcontest/

The Mississauga Arts Council (MAC) is a registered charity, dedicated to accelerating progress toward the attainment of our Vision of Mississauga, as a vibrant cultural community where arts and culture thrive! Our mission is to empower the Arts Economy by Creating more opportunities & capacity; Connecting artists to audiences and each other; and Celebrating artists’ achievements.

Established in 1978, Metalworks Recording Studios was originally the creative workspace for the legendary Canadian supergroup Triumph. From these humble beginnings, Metalworks expanded over a 40+ year time span into a six-studio powerhouse that today ranks as Canada’s consummate world-class studio facility. Metalworks has been recognized as Canada’s Studio of the Year an unprecedented 17 times at the prestigious CMW Canadian Music Industry Awards. Metalworks has become the undisputed leader in the recording studio business in Canada. It is little wonder that Gold & Platinum record awards line the corridors at Metalworks. Learn more: metalworksstudios.com

Mississauga Music’s vision is to bring together and nurture Mississauga’s community of musicians, businesses, venues, promoters, creatives and the like. They aim to create an integrated platform that will feature the next wave of artists in an effort to highlight Mississauga on a national scale. Learn more: mississaugamusic.com

Thank you to our Co-Sponsor and Media Partner